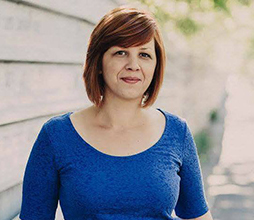 Daniela Širinić is the postdoctoral researcher on the project Disobedient Democracy. She also works as Postdoctoral Fellow at the Faculty of Political Science (UNIZG), teaching statistics and research methods in comparative politics. She received her master degree in political science (MA 2009) and her doctorate from the Central European University (PhD 2016). As part of her doctorate, Daniela also spent a year as a Visiting Fellow at Vrije Universiteit Brussel.

Her research interests lie at the intersection of comparative politics and research methodology, substantively on topics of political behaviour and political representation of, broadly defined, minorities, with a particular emphasis on the achievement of political inclusion and equality of citizens in the processes of representative democracy.

Since 2016 she is also director of the Croatian Policy Agendas Project and is currently working on a series of papers that look at the dynamics of political agendas in Croatia and especially on the interactions between legislative, government and media agenda setting.